Today we recommend the best books that 2022 brings us, sorted by genre so you can easily find your next read.

The year 2022 is full of literary centenaries to remember. Ulysses, the acclaimed work by James Joyce, the poem The Bad Land, by TS Eliot, and the collection of poems Trilce, by César Vallejo, celebrate their first 100 years. Also celebrating its first centenary is the publication of Sodom and Gomorrah and the death of its author, Marcel Proust. That is why this year, the best way to pay tribute to so many key texts and authors in the history of literature is by reading.

For this reason, we have decided to make a compilation with those recommended books that you can read in 2022, editorial novelties that will be in the hands of everyone this summer and that will be in the top 10 lists in a short time. In addition, we have organized them by genre, so you can quickly find your next read.

This 2022 there is much interesting publishing news, it all depends on the type of book you like. But one novel that you will certainly enjoy this year is The Cat Who Loved Books. The main theme of his story is a love of books, and his unique prose draws you into the narrative.

Its protagonists, the heir to an old bookstore and his wise cat, make you fall in love immediately with what you are being told. In addition, it is perfect to reflect on the importance of reading and books in these times when we spend less and less time on literature.

Other good options with which to start this reading year are Roma soy yo, by Santiago Posteguillo, and La cria by Pablo Rivero, if you like the genres of historical novels and crime novels.

Books That Hook: The Cat Who Loved Books 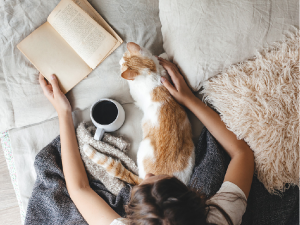 The cat who loved books is one of the many Japanese novels that have begun to be translated into our language in the last decade. It tells the story of Rintaro, a young bookstore heir, and Tora, his wise and resourceful cat.

The mission of our protagonists is to save those books that are in danger and spread the love for them among their visitors. A magical and touching adventure that will keep you hooked from the first to the last word.

In this contemporary novel, Ana Merino introduces us to Inés Sánchez Cruz, a Mexican poet who works as a creative writing teacher in the United States.

The story begins with the transfer of the protagonist to a Student Residence in Madrid, where she will teach a poetry workshop and investigate an important discovery. A family archive of Joaquín Amigo, one of Lorca’s friends, who was also violently murdered at the beginning of the civil war.

Books That Hook: The Dance Of The Water

The Water Dance tells a story of travel and escape, beginning when Hiram Walker decides to run away from the slave plantation that has been his home since his birth. There he has grown up, and there he lost his mother who was sold.

With her departure, they stole all the memories of that maternal figure that has been missing in her life. But this event also brought him a mysterious power that, years later, saves his life. It is this near-death experience that prompts him to start the journey that is narrated in the book.

Books That Hook: The Beast

Regardless of the controversy caused by the Planeta Prize last year,  The Beast is one of those novels that you do not want to miss. The story places us in 1834, in Madrid, a city that tries to break through the walls that surround it and fight against the plague. But cholera is not all they must contend with, as rumors point to a Beast, a being no one has seen but everyone fears. Then little Clara disappears, and her sister Lucía de Ella, Donoso, a one-eyed policeman, and Diego have to start a frantic search to rescue her.

Books That Hook: From Nowhere

Julia Navarro has once again left us speechless with her new novel,  Nowhere. This time he tells us the story of Abir Nasr, a teenager who helplessly witnesses the murder of his family during an Israeli army mission in southern Lebanon. The young man promises revenge.

This promise is repeated in the mind of Jacob Baudin night after night. He was one of the soldiers who got in on the action while serving his mandatory military service, fighting enemies he hadn’t chosen.

Books That Hook: The Forms Of Love

Inés Martín Rodrigo has been the winner of the Nadal Novel Prize 2022 with this story that explores the different forms of love through the memories of a family during the journey of a lifetime.

His prose, which engages from the first moment, accompanies us to live the moment in which Norway receives the unexpected death of his grandparents Carmen and Tomás. A moment in which she must stop and remember, to try to face an absence that is insurmountable. To do this, she faces the novel that she has been avoiding writing for years, one that tells the story of her family.

In this novel, which manages to capture the reader’s attention from the first to the last word, we move to one of the most dangerous peaks in the Himalayas. There, a violent avalanche kills all the men of an expedition, except one. Jack Furness returns home with a strange hominid skull that he gives to Stella Swift, a paleoanthropologist at the University of California, who determines that it is a revolutionary find, which will take them back to the Himalayas.